I was chatting with a start-up CEO today, who had received some early inbound interest from a potential acquiror.  Without any discussion of price, he asked me innocently enough, “Should I think about it?”

I started thinking about the positioning of the Company and the phase, and offered the following.  I think most start-ups go through several brief natural local maxima, to borrow a calculus term, over its life (3-6 month windows of time over a 5 -7 year life) .  Those maxima are periods where, on a risk adjusted basis, it may make sense to exit early.  The trick is to recognize whether you are there or not, so as to know whether you are value maximizing.

To be clear, this is not a post advocating early exits.  Heck, as many other people have observed, as a venture investors generally try to swing as big as possible across a portfolio of companies.  As a maximizer of *company* value, however, you have to be cognizant enough to realize when you are on one of these plateaus, pick up your head to look around, and see if someone might be looking at you through binoculars from afar.   You’ll always have to be “bought not sold”, and many people move from valley to valley never getting to a peak, but if you do, recognize it, assess it, and make an informed decision.

Generally, I’d say an acquisition is value maximizing if it occurs in one of three periods: the “concept” pop, the “growth” pop, and the “IPO” pop.  In the “concept” pop, a company is acquired primarily for its radical vision or strategy, with no correlation to financial metrics.  (This is not in the context of a bubble.)  Think of a Series A company that seems to have a laser sharp vision for a particular space that many other people haven’t begun to understand.   The Company usually has visionary management, early mindshare in a rapidly evolving but undefined/unstable space, and the early positioning (and PR!) to objectively call it a “thought leader”.   In a normalized market, it’s probably just getting to revenue.  The multiple is the highest at this stage b/c the denominator (revenues) is low; conversely the acquisition price is also the lowest because the acquiror has no reasonable financial grounds on which to pay the price.  They just know this could disrupt, transform, or catapult their business and want to be on the ground floor.  This is usually the $50-100MM exit. 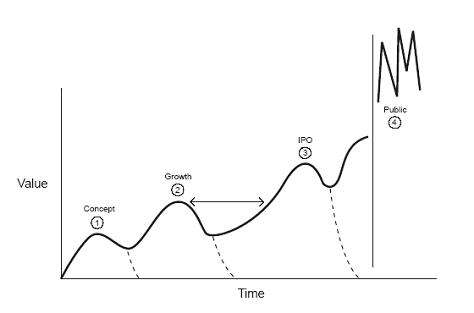 The next major hill is the “growth” one.  This would be a Company likely past its Series B, generating $10-20MM in revenues, has clear market leadership by virtue of tangible numbers like customers/partners/ASPs, and a fully built management team.  In this case, a Company has built hard technology that works, has perfected how its sales machine works, and now is adding fuel to the fire.  It’s probably growing at unsustainable longer term rates of 100-200%+ but can project wonderful visions of grandeur.  Competition exists from a raft of “me-too” startups, but also in the marketing from large vendors as well.  From an acquiror standpoint, you can start putting loose financial multiples to the Company and assessing sales channel synergies.  While the multiples begin to come down relative to the first hill, only a fool would give up what seems like a rocket ship, and so the absolute dollars go way up.  Exit values are usually in the $150-300MM range.

The last major hill is the “IPO” hill.  The IPO hill is the company that has not only done all of the above, but has managed to stave off ALL competitors, large and small, and built a truly defensible position.  The Company has not only done that, but also met the inter-steller, global galactic, worm-hole inducing bar to go public by filing its S-1!  An acquiror at this point would be capitulating that they will not beat the company at its game, and moves in to take it out before it goes public.  The multiples here have to come way down and likely tie to some notion of “accretive” (within 2 years) for the acquiror, but again the absolute number is much bigger.  The universe of buyers is also much smaller given the magnitude of the exit.  This is usually the $400MM+ purchase.

Why look to an “exit check” at each of those hills?  Well, typically, those hill peaks are followed by valleys of varying depth and visibility.  Doing a little more wont change the exit outlook; in fact, it’s more likely to cause you to be “in discussions” while on some kind of a non-optimal slope.   And while there are always larger, more lucrative, adrenaline producing hills ahead, you have to be fully prepared with better equipment, maps, resources, and a better set of lungs, while finding enough sustenance and staving off nipping animals, before emerging on another peak again.  In start-up terms, that means making sure the product works, figuring out sales cycles, successfully deploying at customer expectations, rising above the noise of ever present competitive slideware, maintaining price points, expanding the available market, raising venture capital (aka, dilution!), hiring and retaining great people, building appropriate regulatory and compliance infrastructure, and so on.  All are manageable issues, but companies inevitably move downward from a plateau when getting into the weeds of execution.  The numbers bear out how many make it through to the next hill.

[As an aside, it’s why VCs love guys who have “done it before” – their lungs and maybe wallets are usually stronger to go the higher distances.]

How do you know you’re leaving one of these hills?  I’ll save for another day if there’s interest…

One thought on “The Entrepreneur’s SEO – “Startup Exit Optimization””